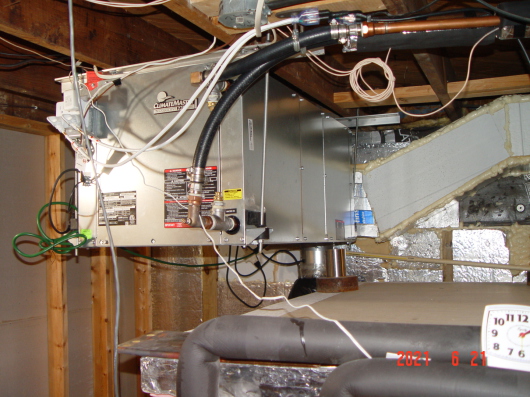 Update 6/20/2021: The two GSH-015’s were taken out due to issues. I replaced them with a single Climate master R410a horizontal unit. The new unit was only very slightly larger than one of the old units in length only, giving me a nearly a 50% reduction in used space. I had to do duct re-work combining the left and right feeds into one, etc.. but it was well worth it. The performance of the unit has been great, exceeding the submittal sheet data at times, something that the old pumps NEVER even got close achieving. In heating mode I have output temps over 100 degF all the time, and when I boost the entering water temp with solar (85 degF feed to heat pump), it goes as high as 117 degF., output air temp.. The over electrical load is about the same at any one given moment. Run times seem to be less, indicating much better efficiency, though I am still collecting data. Using the Climate Master brand thermostat that is designed for this unit specifically, provides me with much more information and functionality as well.

A picture of the new unit is above.

12/03/2008 Update. The two GSH015's are now active in base line mode. The only solar assist is the trench solar flat plates doing direct ground heating. Today we finally had a sunny day, 12/03/2008 Wed... the first one in weeks and the first one since they went active. I am still tweaking them of course, trying to get the right blower speeds. I added infinite blower speed control to each heat pump so I can regulate the air flows better. My duct work is very efficient so I had to cut the blower speeds so the LAT's were high enough and it didn't sound like you were in a wind tunnel when they kicked on. The house re-insulation is still not finished so the down stairs return air is only 62 degrees or so, making it harder to get desirable LAT's. This in the long run will resolve itself when I boost the EWT's with solar directly and the downstairs insulation envelope is done boosting EAT's as well... LAT's in the 100-110 DegF range should then be the norm... which is where you want them to be.﻿ 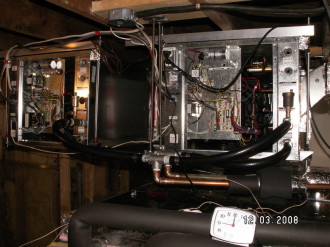 GSH015's hanging from the ceiling. The clock in the foreground shows how long they run each day. The end covers are off showing the control boards. The de-superheater lines are not connected yet. That will be done when they are in direct solar assisted mode.﻿ 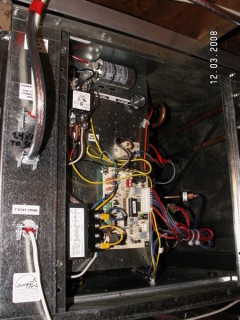 Closeup of the control board end. If you look carefully, at the top under the right lower corner of the silver capacitor, you can see the dial knob for the blower motor speed control I added. It is rated at 6 amps, 240VAC, ebay $20... These two units had the standard CXM boards in them which do not allow for daisy chaining off one thermostat. I upgraded the transformer in 1 unit from 50va to 100va. I then disconnected the transformer in the second unit and ran its control board off the transformer in the first unit. T-stat connections were jumpered across from unit one to unit two, wire for wire. The whole thing cost only $100 as opposed to upgrading to DXM boards in both units, a bit more expensive.﻿ 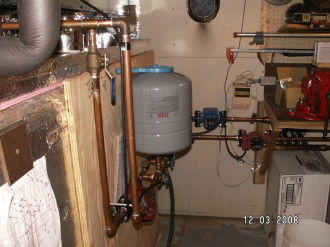 Photos showing loop plumbing, 3 circulators, expansion tank, fill valves, check valves, ground loop manifolds and "to be" flow gauge". I estimate flow to be 10GPM for both pumps together. You can see the GL-30 solar diff. controller in the background for the flat plate trench array. At the top center, you can see the old chimney connection for the Bock 32 gallon oil fired water heater. The one heat pump is hanging where the old Rheem air handler used to be.﻿ 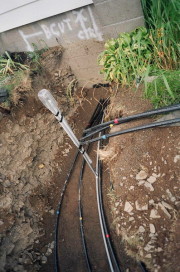 Four 3/4" Geothermal pipe 500' loops go through wall in basement. Trench is 250' long so the fluid travels out on the top 4 and loops around and comes back in the bottom 4 with NO SEAMS in the ground. Grey pipes sticking up are for differential controller sensors quick access.

Other side of basement wall where the eight "ends" enter. Center grey pipe is for the sensor cable (cat3).﻿ 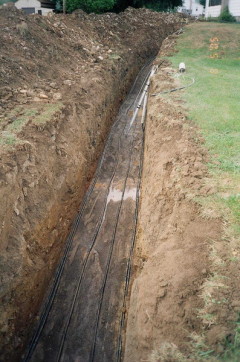 Bottom 4 Geothermal pipes averaging 6' to 6'-4" down in a 42" width trench. You can see next to the outer two Geothermal pipes, the solar ground loop "snuggled" up against them. The solar ground loop pipes and the sensor lines for that differential controller are visable in the white pipes. The 6' layer is backfilled 2-1/2' then the top layer is layed and backfilled the remaining 42" to be flush with the ground.﻿ 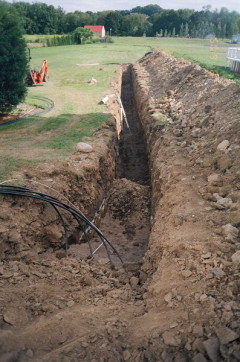 Bottom layer is now being covered up and the top layer pipes and grey 115VAC feed pipe for the outdoor circulating pump are shown curving back.﻿ 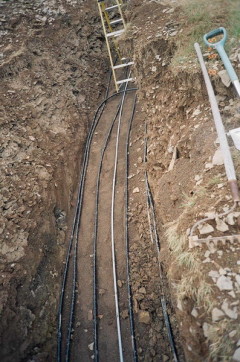 Solar ground loop is shown approaching the house where it curves 180 Degs back down the other side of the trench. Grey sensor cable shown in the middle.﻿ 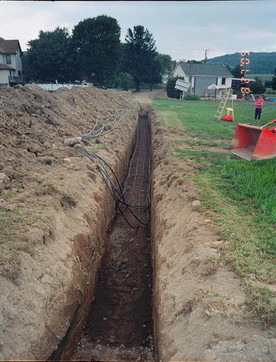 Last 125' of trench has been dug. Bottom has been smoothed out and first layer of sand put down. Remaining bottom layer of pipe has been layed and awaiting sand then backfill to 42" below top of ground. You can see the solar loop folded back on itself do to its extra length at this end of the trench.﻿ 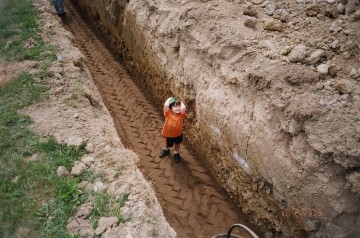 Construction was temporally halted while a quick inspection of the sand layer was accomplished by supervisory personnel.﻿ 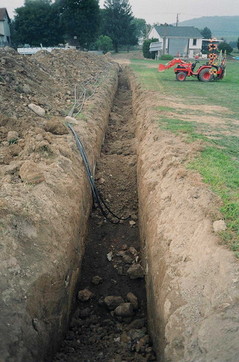 Bottom layer has been backfilled with dirt. Next is to smooth it out with a rake and shovel for first layer of sand and then put down the remaining layer of tubing, final layer of sand then completely backfill to ground level. Should be completed by the end of the Labor day weekend 2005.﻿ 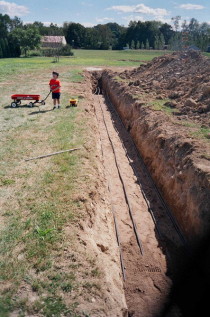 Final layer of sand being put on upper pipe layer. This is the driest year I have seen since 1999!! For this job, I got lucky!!﻿

Back filling complete. Next is the bulldozer to smooth it off before Winter.﻿

Bulldozer levels off for Winter. Springtime final filling and smoothing before seeding.﻿ 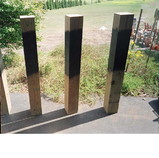 6" x 6" PT wood timbers sprayed with rubberized undercoating above and below the to be ground line. These will support the 3 - 4' x 8' flat plate collectors with the addition of some concrete and aluminum angle iron racking.﻿ 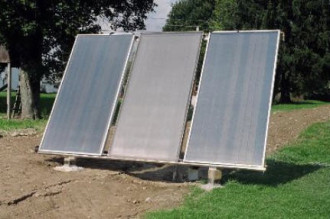 10/20/2005, array active. Just some insulation and sensor wiring to finish. You can see with the large sudden rainfall in October, the trench all at once has sunk about 10". This is actually good so in the Spring the ground can be leveled and seeded with grass.﻿ 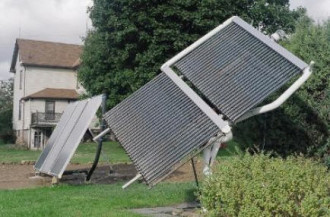 Side shot shows both the tracking evacuated tube array and the new SAHP ground loop array. ﻿

READ!! "How many lights are there? How many fingers do you see?"