I acquired a SkyStream 3.7 from a renewable energy dealer who was no longer interested in selling the SouthWest product. The turbine was a demo unit with the "window" in the side of the Necel. The alternator proved to be good but the internal inverter board and relay board were no good. I guess they load failed QA inverters and relay boards into the demo units assuming that they will never see service anyway. So, I did two things. I aerodynamicaly altered the blade configuration for my low wind area. The strongest gust I have seen in this valley location after 20 years is less than 60 MPH. Sandy delivered a 54 MPH max gust followed by a 50 MPH gust in second place. The second task was to use an external inverter with the on board alternator. I chose an Aurora 3.6 for the job. I designed a DC power output circuit which uses voltage doubling technology and customed designed a relay based lockup board which locks down the turbine upon peak RPMs. A no load lockdown PRM is the lowest and a full fload lockdown is at a higher RPM. Currently the unit is being readied for a test stand where it will only be 12 feet off the ground for easy access and testing. The SkyStream is factory spec'ed for a 2.4 KW output, but my config will yield a peak of 6KW.

This is a video of the Skystream in a moderate wind with some details about it...

This video is the first thunderstorm hitting the Skystream from a direction that is open. It eventually causes a turbine trip to shutdown, a hoped for goal of this storm. It was nerve racking though because the first time anything could have happened.... 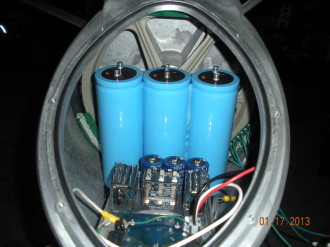 This shot is looking into the back of the Necel with the heatsink top removed. You can see the large caps and relay board. 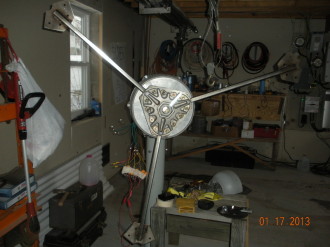 This is looking at the front. Skystream is a downwind machine. I have pushed the blade length out to 8 feet from 6 feet. This increases the sweep area by 80%. I used 304 stainless 1" square stock, 1/4" wall with custom 304 stainless brackets to hold the blades as they are held in the factory config.. This will increase the torque along with a smaller 6 foot diameter secondary rotor which will be downwind slightly from the main 3 blades. The seconday rotor has 9 blades configured for torque at low wind speed. The combination of the two rotors should yield very good low wind output. Please be clear, I am not going after power that is not present in lower speed winds as compared to higher speed winds. I am mearly maximizing the power curve skewed toward the lower end where more of my wind is. 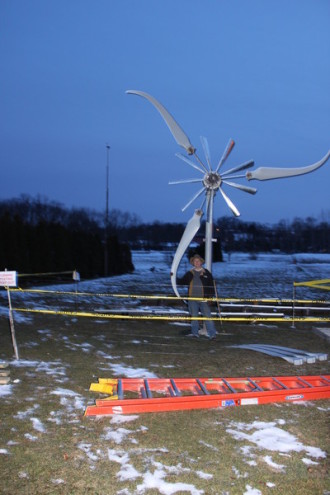 This is the first version of the modified SkyStream. Blades are pushed out to 8' and a 9 blade (3' blades) secondary rotor is spaced between the 3 main blades. There will be much tweaking I am sure. The electronics package is working pretty well as well as the overspeed braking. I am working on developing the power curve which is very difficult to say the least. I have removed the secondary rotor to evaluate the main blade extensions first. Photos below show the lift up process. 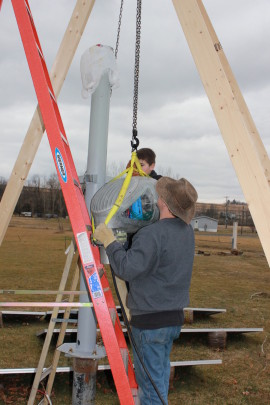 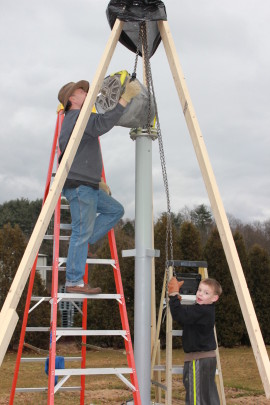 Neighbor helping. Everybody had a hand on the chain hoist... 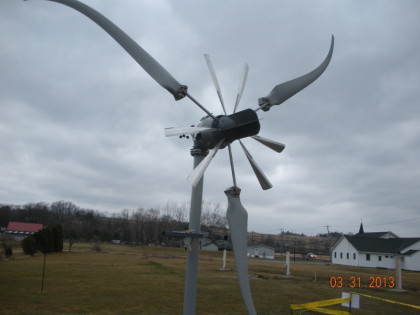 There are several changes to note here. First, the secondary rotor has been reduced from 9 blades to 6 blades. This was done for some weight reduction and to make a more equal spacing between the blades. The distance from any one main blade to either the secondary blade "in front" or "behind it" is now about equal to the distance between the secondary blades themselves. This makes much more sense. The extra 3 blades (removed) were really more of an interference than a help being almost on top of the main blades.

The second change is the nose piece has been placed on the hub. However, I added a "+" shape extension to the nose piece which helps to add rotational direction for the yaw. Sky Stream 3.7 in the small wind industry has the nick name of, "Wrong way 3.7". This is because one sees them many times pointing directly into the wind (180 degs off) as if they were an upwind machine, and of course not rotating. I analyzed this problem and came to the conclusion that three different factors were responsible for this. First the rubber vibration isolators above and below the support "disks" were too soft of a rubber. Second, there is minimal aerodynamic drag to prejudice the turbine one way or the other when it is directly 180 off correct direction in reference to the current wind. Third and more of an overall directional issue, leveling the turbine so it has no directional preference over any other direction is not an easy task. 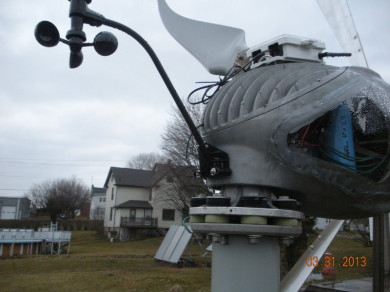 Before I begin on direction issues, you can see I added a separate anemometer for the exact wind speed hitting the turbine. I have one on my weather pole 28' up and 50 or so feet away, but for power curve evaluation I needed to know the exact wind speed (at least as good as I could get) when comparing power outputs, RPM's and wind velocity.

Now for direction, I replaced the 8 top rubbers with custom made rubber washers from after market rubber coil spring spacers used on coil car springs. Their rubber is twice as hard as SS 3.7's rubber. WHY did I attack the hardness of the rubber?? After several days of observation, I noticed that when there was no wind and the turbine "sat" in the same direction for more than a half day or so, the rubber on the "heavy" side seemed to compress and show a "memory" effect, helping the turbine to favor the direction it HAD and IS in. This made it hard in light and moderate winds for the turbine to yield to the currect wind direction, particuarly if the "NEW" wind was opposite to the previous wind. 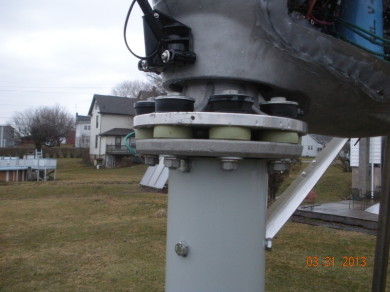 Close up of new snubbers... 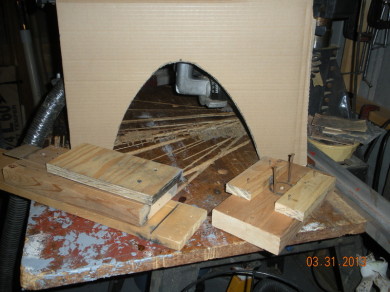 I made some crude wooden jigs to enable me to "thin" the to thick coil spring spacers and drill the circle shape I needed for the washers. I also made a nose cone shape template for the 1/8" PVC 12" x 24" sheets I used to make the plus shape to add to the nose cone in an effort to give more "turn around" force to the yaw when facing a wrong way wind situation. I will evaluate over the next few days to see if the desired effect is attained. 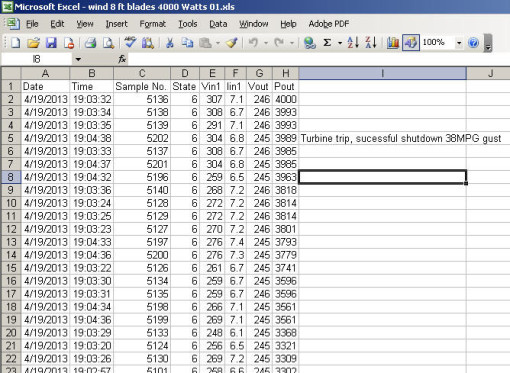 Pout is the actual watts output to the grid. If you multiply Vin1 x lin1 x 2, you will get the input watts. Multiply that number by .95 and you will get the output watts or Pout. The column lin1 is the output current, but there is lin2 which carries the same current. So, you have to add the two currents together and multiply by the voltage to get the watts. The Aurora 3.6 inverter has two input circuits and I have them wired in parallel, thus they carry the same current. AS I verify the power curve into the higher wattages, I will post the data.... This was recorded during a thunder storm 4/19/2013. It was quite impressive to watch the turbine do an orderly shutdown when the 38 MPG gust hit it. I have a video of it almost to the shutdown point. The rain was hitting me so hard that I had to abort just before the gust and turbine trip. I have to say, I am very pleased with my engineering...!!!...

WAR: What a waste. What we could have done instead.